Aliki Makrigianni (2017) has followed in the footsteps of her compatriots and former MSc FEC students Hara Vlachou and Theodoros Karamanolis to the island of Syros. Aliki spent the summer working on the Syros International Film Festival. Aliki had a brilliant time working on the festival and has come back full of exciting ideas around film and live music collaboration.

As we’ve spent years longing to go out to Syros to enjoy AnimaSyros – the international film animation festival – which Hara and Theo have been working on, this just feels like rubbing it in a bit. 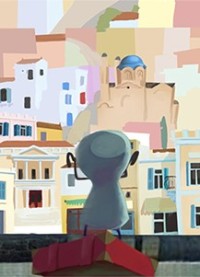 And to prove there is no end to the sickeningly glamorous travels of our FEC students, this update on what Steven Armour (2016) has been up to since submitting his final project is enough to have me chewing my desk as I look out at the Edinburgh drizzle. Thanks for the kind words Steven and can’t wait to hear how it all went.

“I just wanted to send a quick email to thank Jane and Susan for being such encouraging and truly inspiring course directors, and for making the Film, Exhibition and Curation course so enjoyable.

I thought I should also update you to let you know I’ve had the good fortune of being selected for this year’s 28 Times Cinema initiative, organised by Europa Cinemas, meaning that I will be attending the Venice Film Festival next week as a jury member and reviewer for the Venice Days sidebar selection of films. The jury comprises myself and 27 other young individuals from each country of the EU (I’m representing the UK), and we’re presided over by avant garde queer filmmaker Bruce LaBruce (Film and Gender will come in even more handy!).

I believe my involvement and experiences in Film, Exhibition and Curation were invaluable for my application and helping me secure this position. I also get to partake in workshops covering the likes of cinema networks across Europe, film festival social media marketing, translating cinema for European audiences, and film criticism. Should be a great and exciting experience!”

Leslie de Oliveira (2016) took up a fantastic opportunity in Paris earlier this summer, volunteering on this year’s  Nollywood Week film festival. Nollywood Week is a relatively new addition to the festival circuit and is dedicated to promoting  a lesser known cinema. Leslie says she was particularly drawn to  working on an event that “ focuses on promoting an alternative cinema (successful in Africa and within the African diaspora around the world but not distributed through Western traditional circuits, hence totally invisible)”.

As it turns out she had a ringside seat at a festival which is growing rapidly from its initial small scale to a major happening in the city. Leslie says she learned a great deal from the challenges and the successes of the festival and that “ It was very interesting to witness the mutation of a small festival with humble expectations to a larger scale event “

Leslie has now returned to Paris and is working on some collaborative cultural projects as well as having set up her own company to develop her own film curatorial practice, beginning by working on the lovely ideas she was researched for her final project. Bonne chance et bon courage Leslie.